CRO may sounds like a bird, but this special science can spin hay into gold: it can turn visitors into customers and customers into devout fans and brand advocates.

And the most shocking part is that most people don’t even know what it is.

Conversion Rate Optimization, better known as CRO, is the ongoing, iterative process of growing your ecommerce website to boost conversions. It’s like SEO for people.

But CRO isn’t easy. It’s expensive, time-consuming, and very, very hard. That’s why we’ve made this basic guide: to help merchants peek behind the scenes and make the most out of this complex process.

CRO is all about optimizing conversion rates (turning visitors into buyers).
But most importantly, it’s what all the big leagues do.

Look at this graph of Wordstream data. It shows how many people have each conversion rate.

Half of all ecommerce stores have a conversion rate under 2.35%. The further a store creeps past that magic number, the harder it gets.

But right at the end is a huge peak. The top 10% broke the mold and invested in CRO. As a result, they have massive conversion rates well over 2.35%, and sometimes well over 11.45%.

Why? Because these big businesses spend more on CRO than anyone else.

How to optimize to convert

The best strategy depends on the website. No tips and tricks will be enough. Instead, arm yourself with a brilliant methodology that will show you exactly what your own website needs.

Every test begins with a hypothesis, which starts in analytics.

The next time you explore your analytics, check out the conversions tab.

Look at the data and write down any questions you may have about the status quo.

Why do so few visitors convert into buyers?

Then, answer that question with your best guess.

[SITUATION] is the case because [REASON]

Visitors don’t become buyers because the checkout page is clunky.

This best guess is simple, testable, and useful for your entire team. Now, you’re ready to move on to the experiment.

You have a hypothesis. How can you test it?

In science, an idea is falsifiable if a hypothetical experiment could test if it is wrong. Here are some examples.

The sky turns neon green at 2am

This statement is falsifiable. You can build an experiment to prove it wrong by staying up late and looking at the sky. If the sky doesn’t turn green, the statement is false. Otherwise, it’s true.

The sky is neon green, but only when no one is looking.

This statement is NOT falsifiable. There is no way to disprove it.

When devising an experiment, make sure your hypothesis is falsifiable. Then, find the experiment that could hypothetically prove it wrong.

Your falsifiable hypothesis is ready. How do you turn it into an experiment? 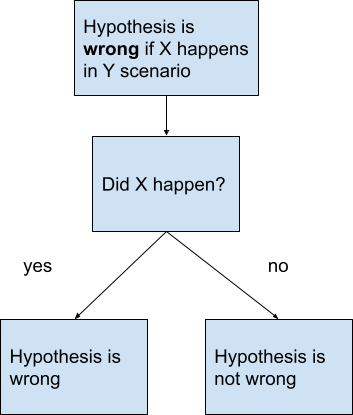 For that reason, you’ll need to run lots of tests and constantly reevaluate based on your findings.

Here are a few common experiments marketers use to test their hypotheses. These are far from the only options.

A/B testing is the holy grail of marketing research. It involves showing one version of the site to one visitor and a different to the second. Then, you compare results. 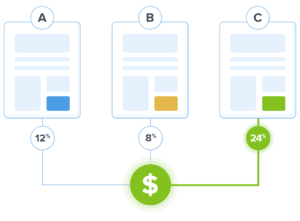 Most people do this on social media all the time. Change up your posting style a tiny bit. Does it get more likes?
Content testing is like this, but on a bigger scale with ads, product pages, blog posts, and any marketing content that drives sales.

Is the funnel the problem? Talk to your development team and experiment with conversion-boosting tweaks and features.

Focus groups involve talking to lots of people about what they like. It’s not an amazing method, but it works in a pinch.

You have the results! Now what?

Your hypothesis has been thoroughly tested; now you can make the necessary changes.

But for true CRO results, you can’t stop here. You have to keep going.

Uber runs more than 1000 experiments per day on a fully-custom platform. Netflix runs even more on their millions of users worth of data.

They use this model from famous statistician George Box.

CRO isn’t just about a few market research experiments. CRO is by definition an ongoing process. It’s a never-ending loop of deduction and induction: testing theories and applying facts.

The more experiments you do, the better CRO will work.

Fyresite's 2021: a spectacular year in review