Shopify Plus vs Adobe Commerce: Why Magento still loses - Fyresite

Shopify Plus vs Adobe Commerce: Why Magento still loses

Long-time readers have probably seen our review of Shopify vs Magento, in which we quickly conclude that Shopify is the better option. For most stores, Shopify is undoubtedly the better option. However, some of our readers have argued that the post was incomplete because it didn’t dive into Shopify Plus vs Adobe Commerce Powered by Magento: the enterprise services offered by Shopify and Adobe, respectively. After a careful analysis, our development experts have concluded that Shopify Plus is, once again, the best tool for most enterprise-level eCommerce projects.

Shopify Plus vs Adobe Commerce: The Basics

There’s not much to add here that isn’t already covered in our original Shopify vs Magento post. After all, Shopify Plus runs on Shopify and Adobe Commerce runs on Magento 2. Read the original post to learn how Shopify and Magento compare in terms of interface, hosting, themes, cross-listing, business tools, core analytics, and community. Everything we discuss in this post will be unique to Shopify Plus and Adobe Commerce.

Shopify Plus vs Adobe Commerce: Manageability

The number one argument against Adobe Commerce and any form of Magento is manageability. Magento 2 is really annoying to work with. It’s so bad, even Magento fans hate using it.

Adobe Commerce uses outdated technology, a bloated codebase, and far too many external dependencies. The results show: Magento 2 has over 1000 open issues on GitHub right now.

Magento is a pain to use — most (if not all) of our most talented developers refuse to start Magento projects because it’s such an unnecessarily difficult and time-consuming system; it’s just not economical for developers or merchants.

Shopify Plus beats Adobe Commerce in terms of ecosystem without a shadow of a doubt. In fact, the app ecosystem has been one of the biggest selling points of Shopify as a platform.

The app store is full of certified, efficient apps that add priceless functionality to your website. The ecosystem keeps growing, and new development partners are added every day. 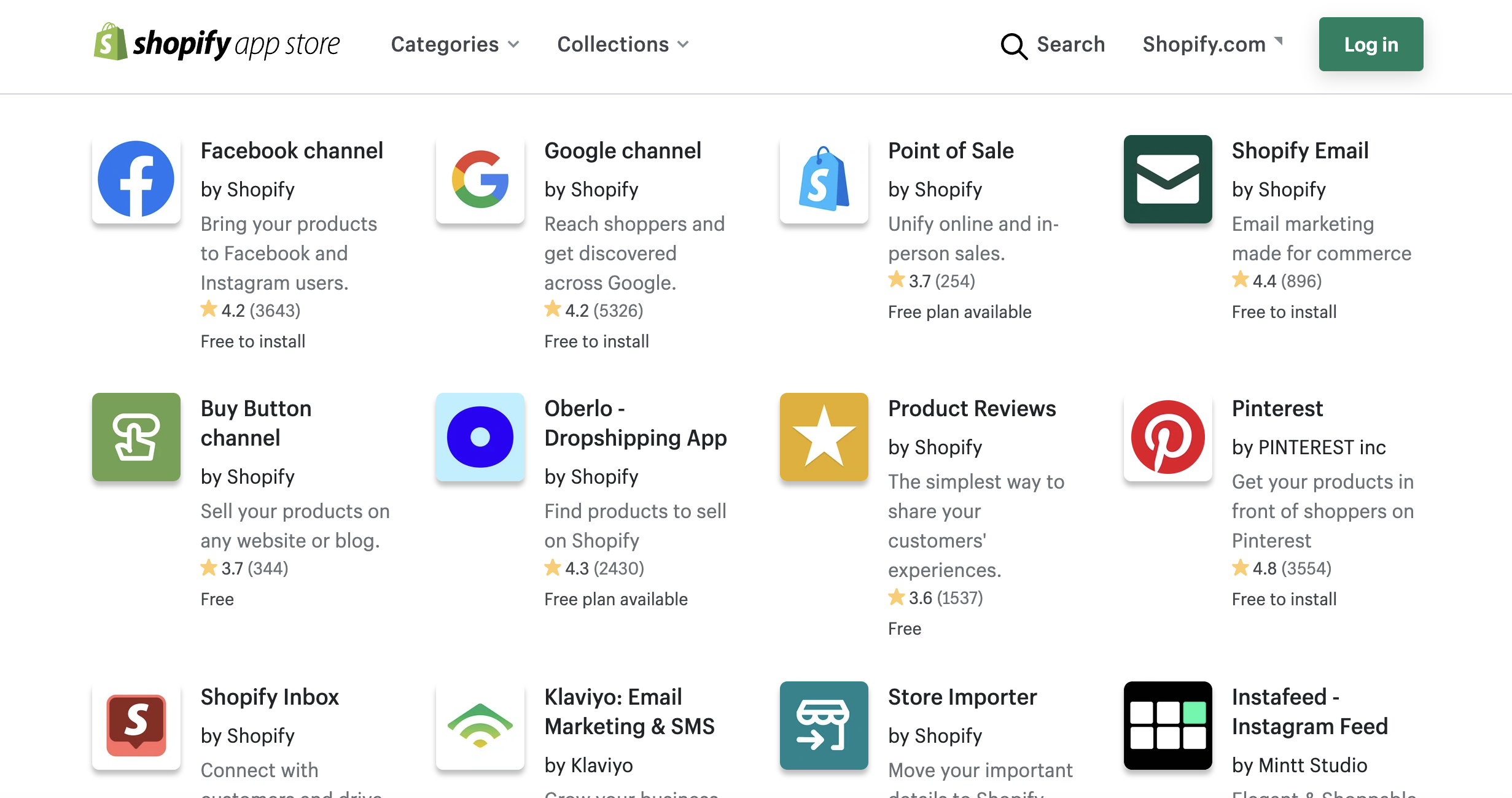 If that wasn’t enough, Shopify Plus includes an exclusive Shopify Plus app store, too. Each app has been carefully selected to help large enterprises maximize profits and efficiency — and it grows daily. 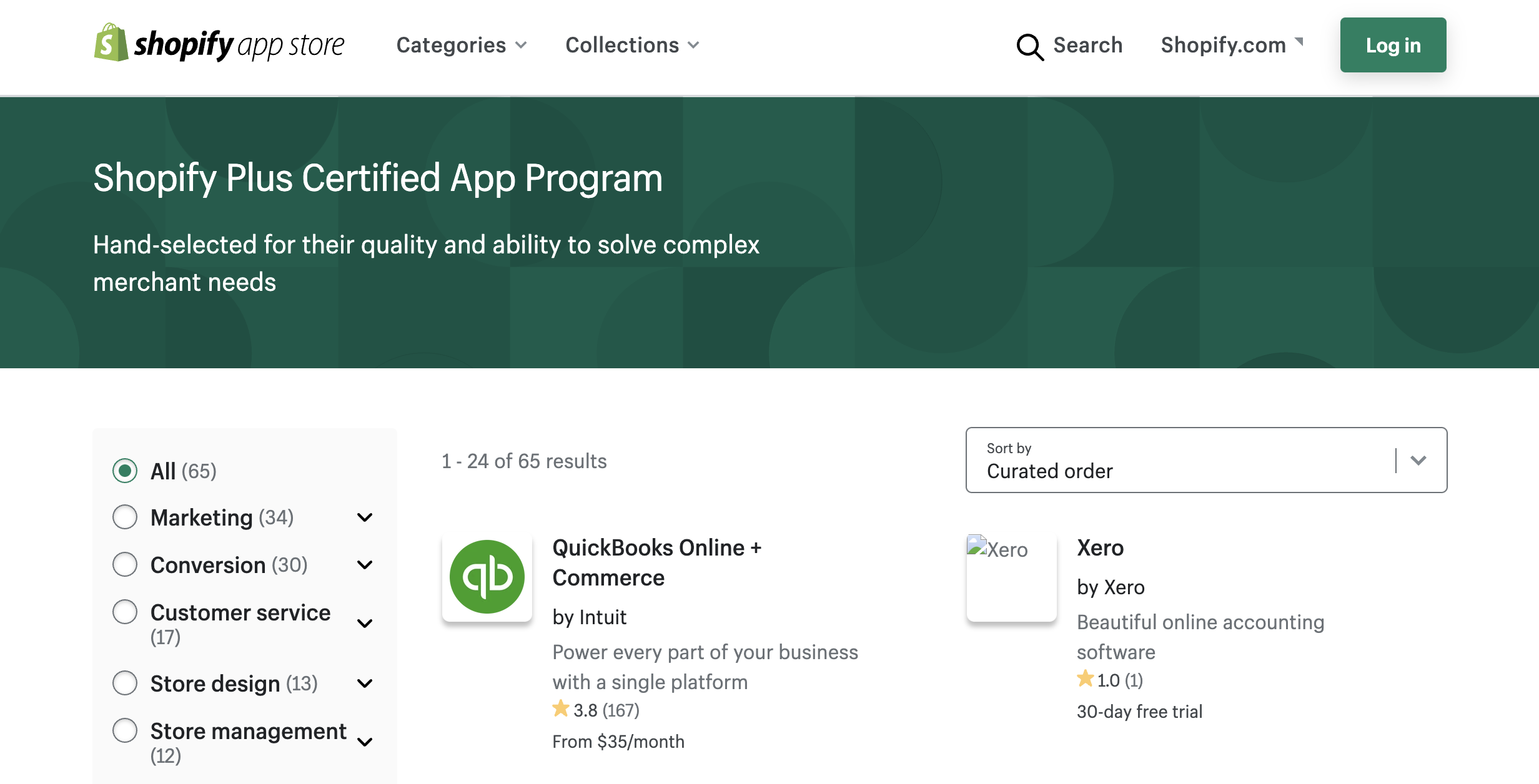 Adobe Commerce is far worse, especially since Adobe has moved away from the open-source model that once made Magento so versatile. The extensions are buggy and clunky, and making an extension takes far too much work for even the best developers. 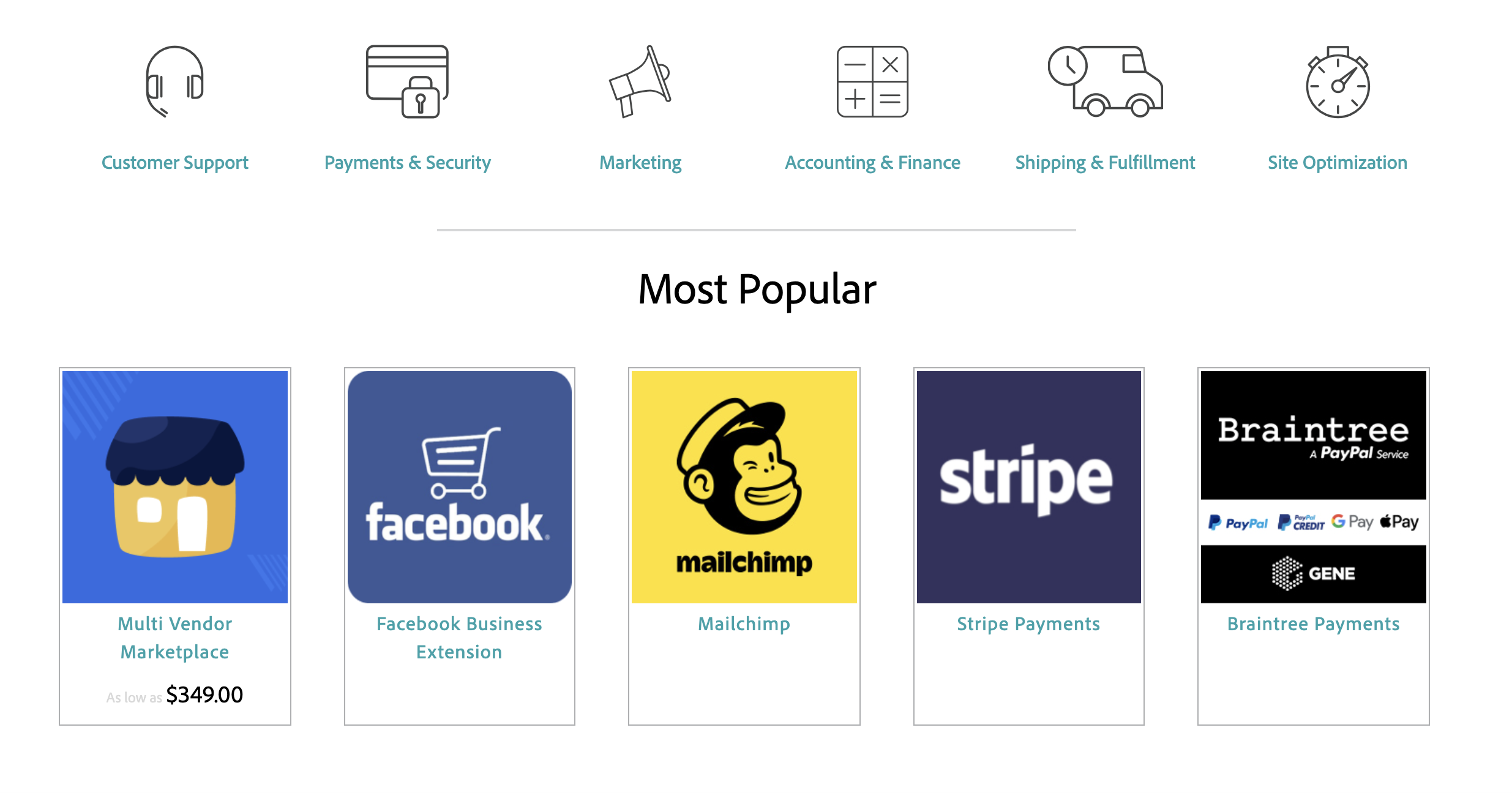 The biggest issue with Adobe Commerce is that it is very much part of the Adobe ecosystem, and every single extension, app, and integration feels slanted toward full Adobe immersion. Adobe is constantly trying to add updates without fixing major issues in a last-ditch effort to milk Magento of its worth.

Adobe’s control of the platform has alienated so many developers and merchants, who migrate to Shopify Plus just to avoid another slew of site-breaking updates. People fear for Magento’s future. They worry that changes will completely ruin their infrastructure and force a new, expensive rebuild.

Adobe is killing its own Adobe Commerce ecosystem, and everyone knows it.

Shopify Plus vs Adobe Commerce: Community

Since its acquisition by Adobe, Magento (especially Magento Cloud) had lots of bugs, errors, and fallbacks. The system has pushed through quite well — it’s now used by almost 3000 of the top million websites (although these statistics are unreliably low, since BuiltWith splits Adobe Commerce). 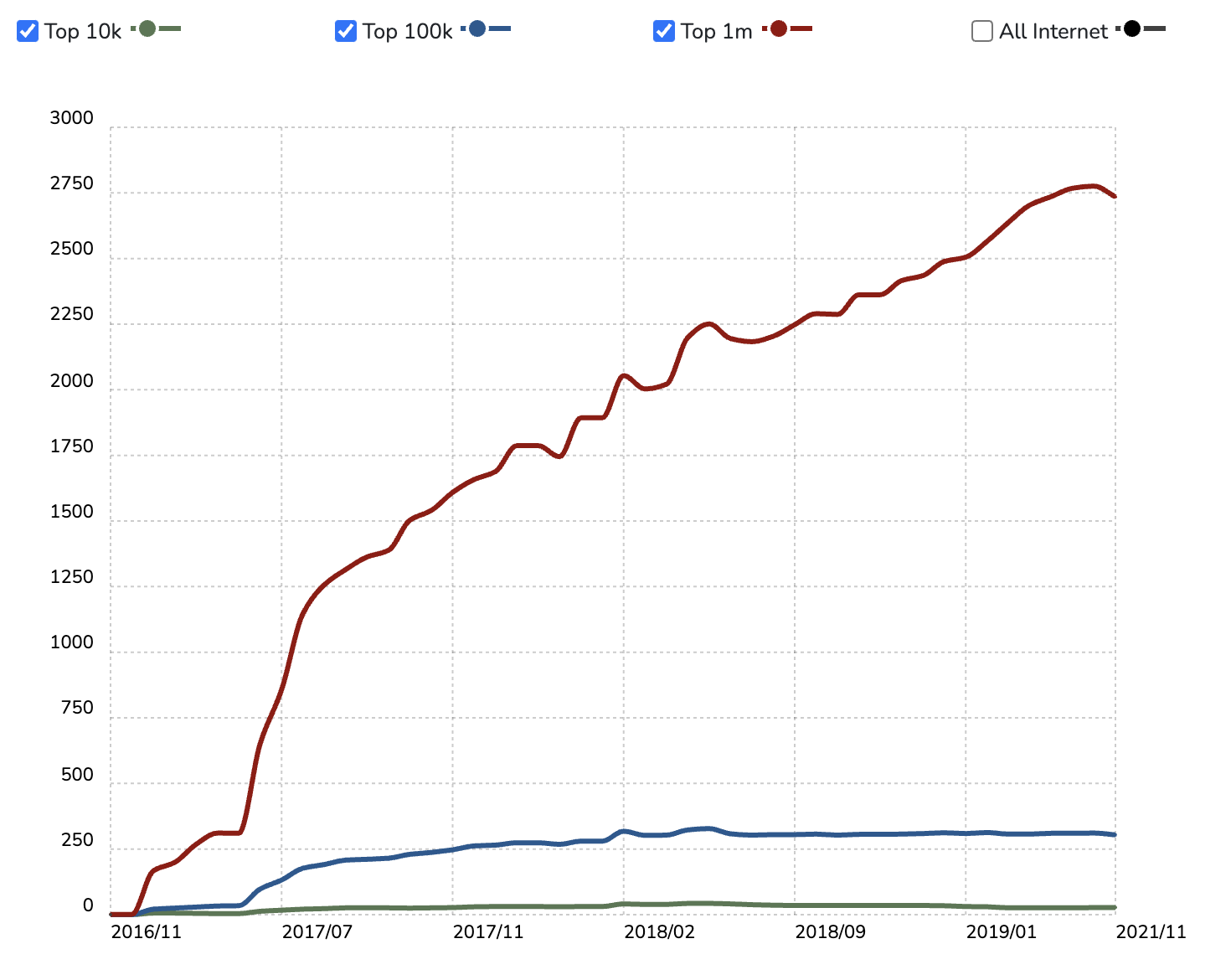 However, this growth isn’t permanent. What made Magento so powerful originally was that it was open-source. Since then, Adobe has stripped functionality and freedom for a hefty price tag. Even the Magento community hates it.

Ever since Adobe took over, the Magento community has united over one thing: how terrible Magento is. The account @memegento, for instance, exists only to make fun of how bad Magento is.

However, Shopify has always had a much more loyal, helpful, and lively community that will continue to outpace Magento and Adobe. The Shopify Plus community is especially noteworthy: joining Shopify Plus puts you in a network with some of the biggest business leaders on the planet. 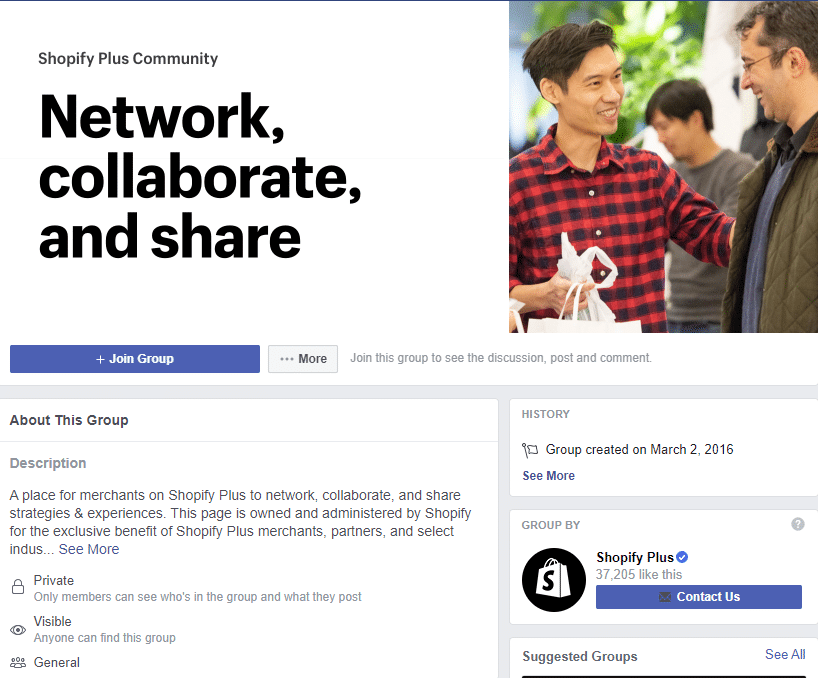 Additionally, Shopify Plus users gain access to the Shopify Plus academy, which is full of amazing, detailed lessons that provide value to your business. 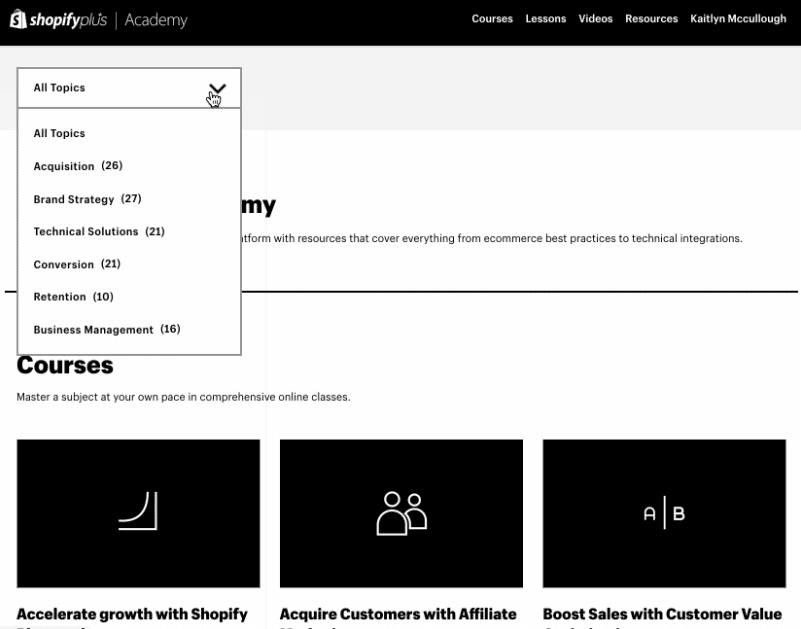 The amazing networking groups, lessons, and more make Shopify Plus a much more vibrant, growth-focused community. Adobe Commerce is shrinking, while Shopify Plus is growing. The winner is obvious.

Both Shopify Plus and Adobe Commerce give merchants lots of flexibility in data flow. In these types of posts, Adobe Commerce usually wins, but I will argue that Shopify is actually plenty flexible, if not a more viable option in many cases.

Both platforms are “headless,” which means instead of accessing the backend through a restrictive front end (the “head”) programmers can access the APIs directly. This allows developers to build custom, unique data flows for sub-second loading and audience-specific storefronts.

For Shopify Plus, headless eCommerce is a honed feature of Shopify Plus. It integrates seamlessly into the other features, such as custom storefronts, PWA support, and more.

Why does Shopify Plus’ headless eCommerce win? Because it’s so much more manageable. Headless eCommerce is not for everyone, and it takes a lot of work to function properly. But where Shopify takes one step, Magento takes ten. In fact, many professional developers refuse to work with headless Adobe Commerce altogether.

But what about multi storefront management?

Perhaps the biggest argument against Shopify Plus is that it doesn’t support as multi-store management in the same way that Adobe Commerce does. This argument is a bit of a strawman, and it’s been perpetuated through blog post after blog post.

The myth is partially rooted in fact. Adobe Commerce does allow developers and merchants to make changes at different levels with ease. For many international companies, this is vital for appealing to localized markets. 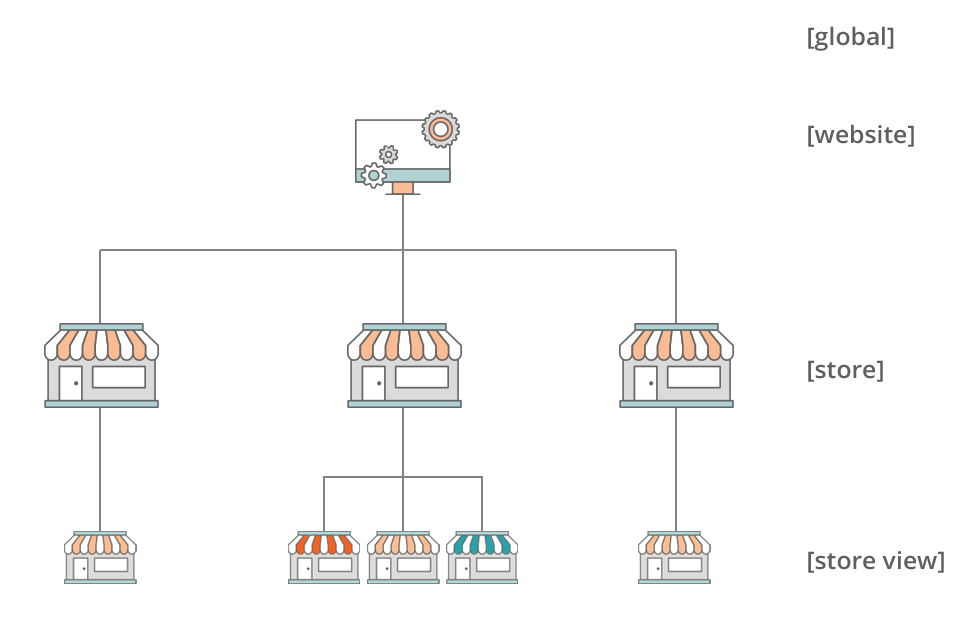 For some enterprises, this feature is vital. If your company has a primarily overseas market, hundreds of specific storefronts can make a huge difference.

However, the argument that Shopify can’t do this is completely incorrect.

Out of the box, Shopify still offers ten total stores, robust currency and language conversions, and 100 theme variants. If that’s not enough, you can easily open a clone store to expand your capabilities — it’s pretty easy.

Adobe Commerce has one perceived edge, and even that isn’t too big of a deal if you have a good developer (in fact, it may be easier).

Shopify Plus vs Adobe Commerce: Wholesale

For whatever reason, lots of blog posts claim that Adobe Commerce has better wholesale support. On a feature-only level, this sort of makes sense. The B2B suite tries to structure itself around complex business structure, and it includes some useful features. 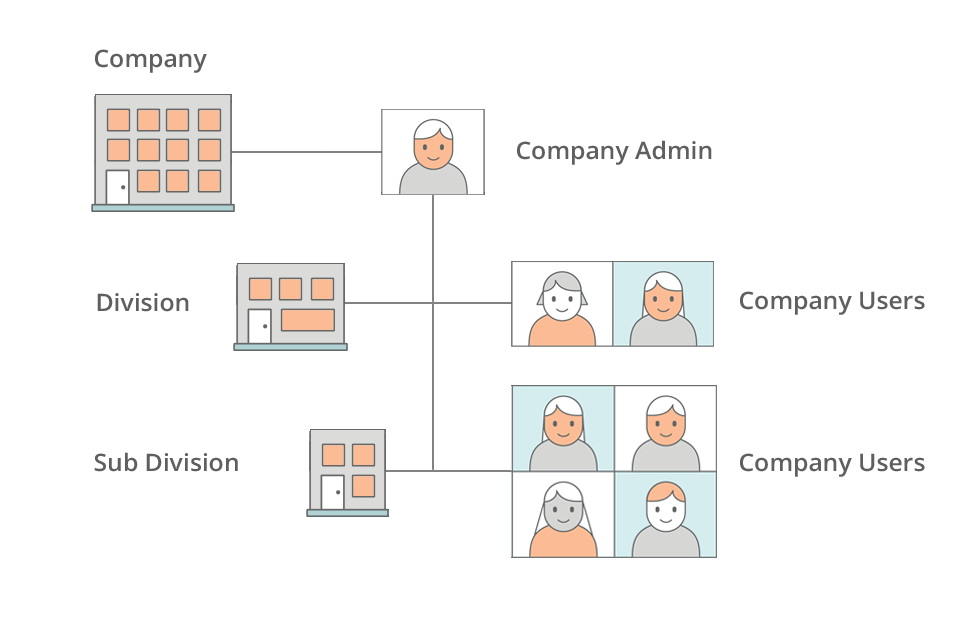 As the argument goes, Shopify Plus requires some extra work to get these same features. That’s a really bad argument.

Shopify Plus can easily achieve many of these same features through very simple automations and add-ons. Because the ecosystem is so powerful, there are plenty of really good options, and even without apps, many of these processes can be automated in flows.

Shopify Plus can easily compete in the wholesale and B2B market. In fact, it’s much better in many ways. Ever since Magento 2.4, Adobe has been adding mostly-empty niche features for large enterprises without fixing core issues, addressing bugs, or even looking at community pull requests. Some shiny B2B features don’t make up for a dumpster fire. Shopify is clean, efficient, and has plenty of extremely powerful features.

Spread the Love is a perfect example, since they sell peanut butter to large restaurants and chains. We built them a really powerful wholesale and B2B store using the Shopify Plus channel and clone store — it works beautifully and boosted their profits and conversions.

The same store would have taken far more work on Adobe Commerce and functioned half as well.

Shopify Plus vs Adobe Commerce: Automation

Automation is better on Shopify by a long shot. Shopify Flow, which comes with Shopify Plus, uses three-step visual flow modeling to make automation simple, fast, and powerful. 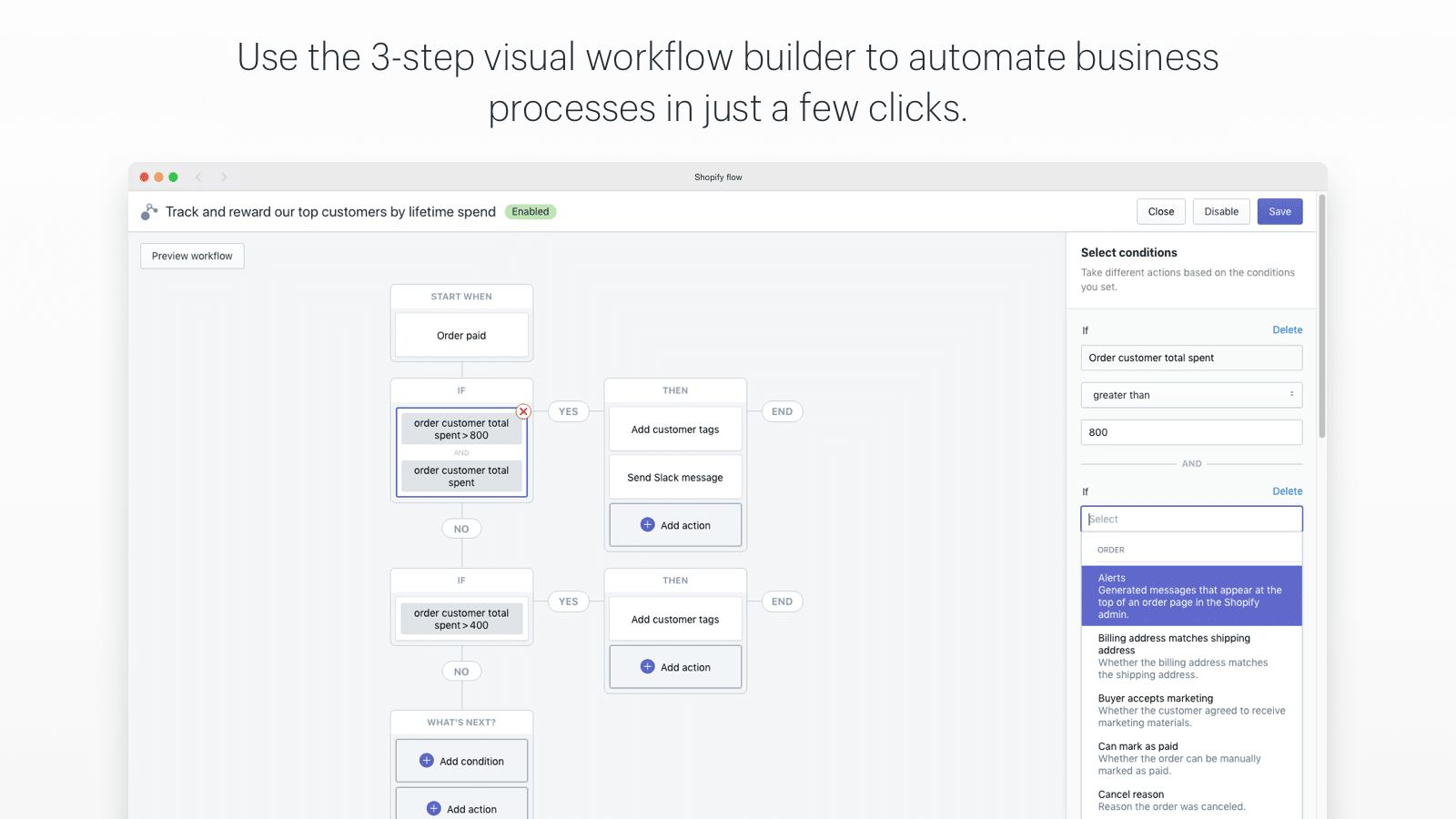 The Shopify Flow system alone is worth the Shopify Plus price tag. What does Magento have in comparison? Not much.

Magento automations aren’t as powerful. To get remotely the same functionality in Adobe Commerce, merchants need the dotdigital Engagement Cloud extension, which is clunkier, less powerful, and more annoying to use. 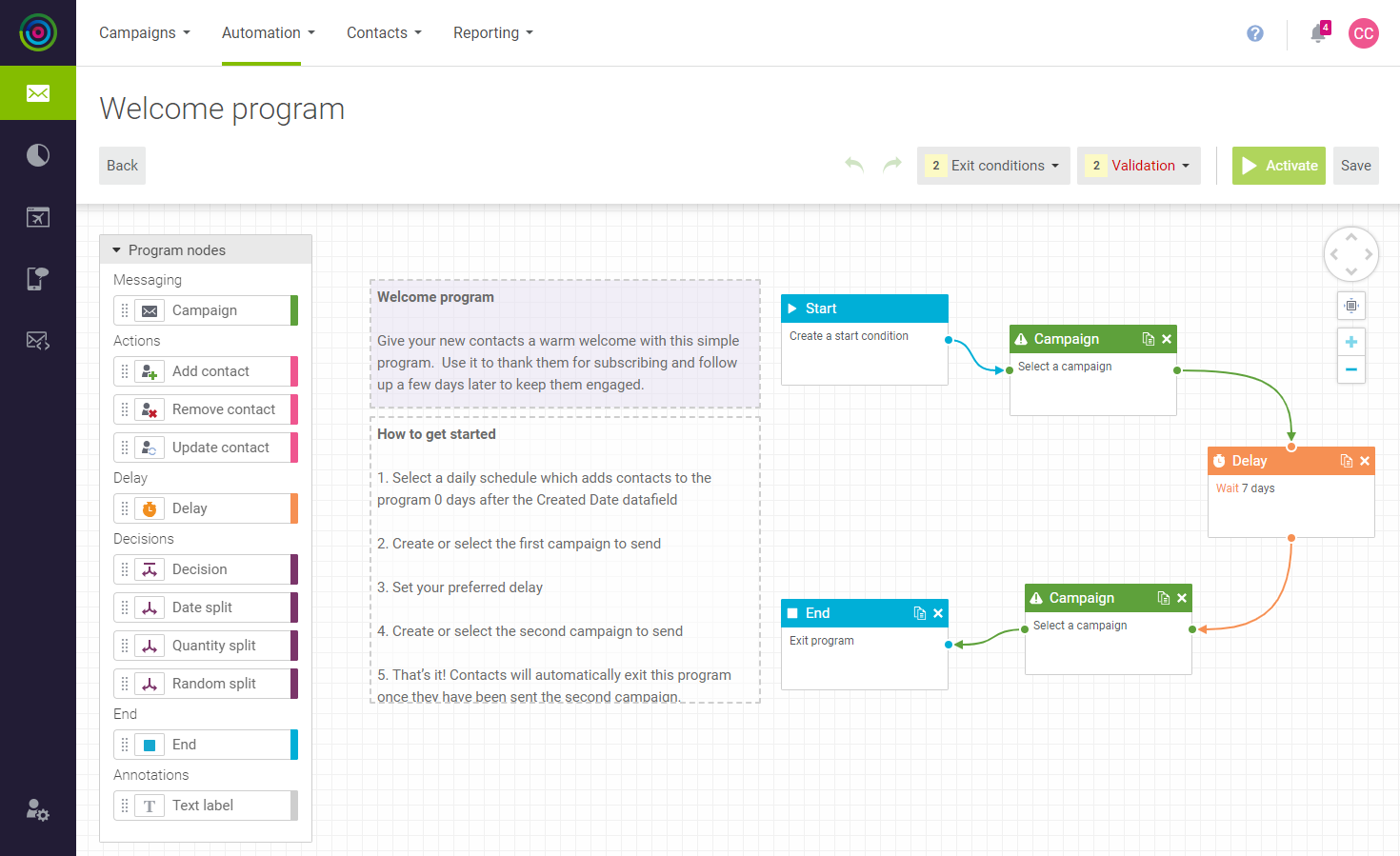 Shopify Flow alone is worth the Shopify Plus price tag — Magento and Adobe Commerce can’t compete in the automation department.

Shopify Plus vs Adobe Commerce: Reports

Without a doubt, Shopify Plus reports are far superior to Adobe Commerce Business Intelligence.

Shopify has been honing advanced reports longer than Shopify Plus has existed. It’s a central distinction between lower-level Shopify plans, so the company has had a huge profit incentive to make premium-level reports as detailed and friendly as possible. 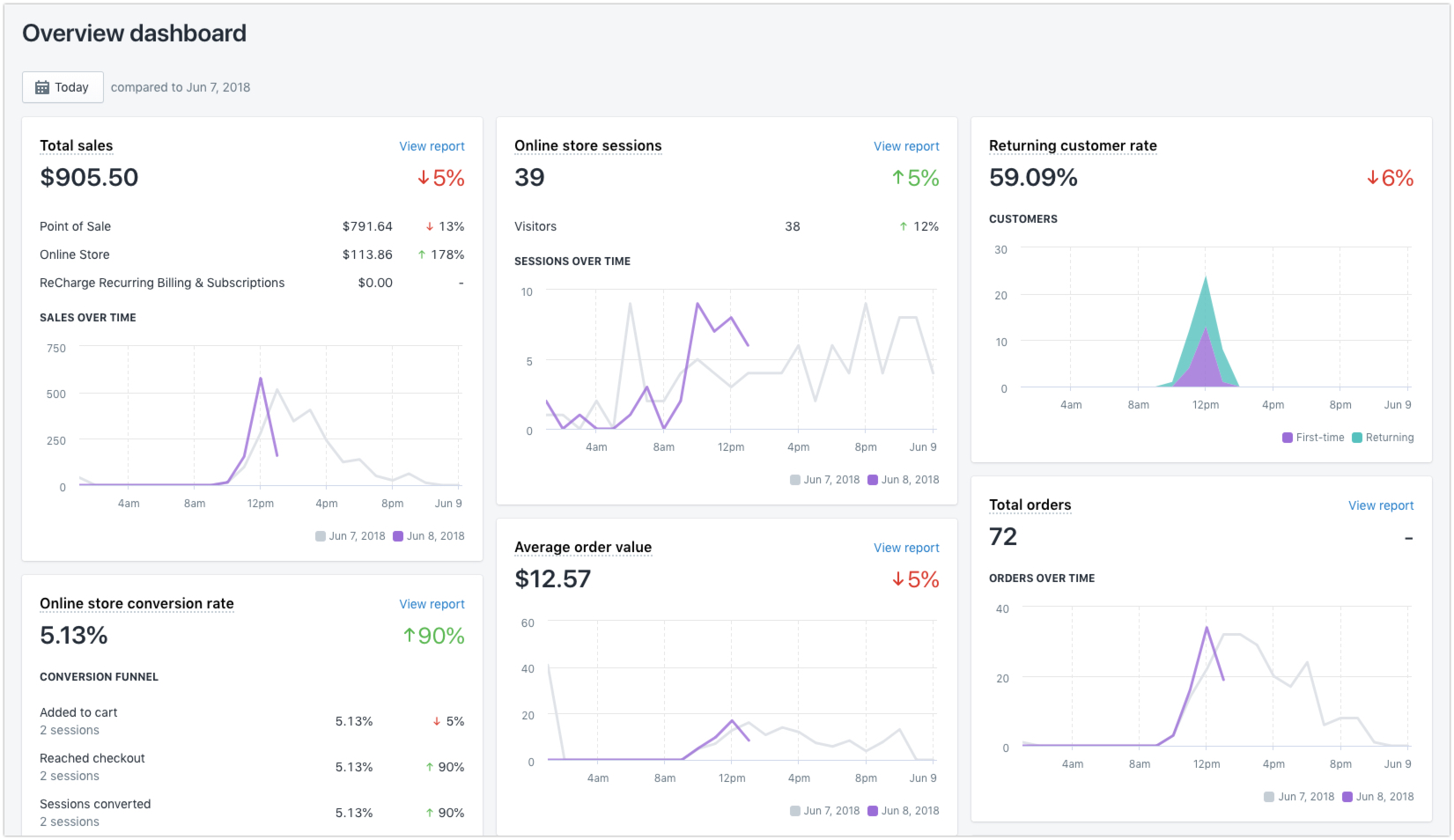 Adobe Commerce, however,  is far behind. Magento reports are much less detailed with a clunkier interface — you get less information presented less cleanly.

Recently, Adobe Commerce did acquire RJMetrics, now simply Business Intelligence. It’s a step in the right direction. Analytics are more detailed than they were before, but the interface is still imperfect.

Shopify has been focusing on reports for a while, and Adobe Commerce may not be able to catch up in time.

Shopify Plus vs Adobe Commerce: Pricing

When one platform is obviously better than the other, one would expect the prices to be vastly different. But since Magento belongs to Adobe, that’s not the case.

Adobe Commerce starts at about $22,000 per year. The cloud version (which is even clunkier and buggier than standard Adobe Commerce) starts at $40,000.

Shopify Plus is a much better platform, but it’s roughly the same price. Shopify Plus starts at about $24,000 per year. Both platforms cost more the bigger your business is.

Why anyone would pay over $22,000 per year on a platform only slightly less irrelevant than its open-source equivalent is a complete mystery to me.

Magento 2 and Adobe Commerce are dying. Developers are dropping Magento 2 every single day, and every time Adobe releases a new update, countless more people leave. It’s only a matter of time before Adobe lets Adobe Commerce and Magento 2 sink — don’t be caught on board.

If you’re thinking about making the switch, please use Fyresite’s Shopify affiliate link to sign up. If you need help, read more about Shopify Plus and reach out today. We’d love to give you a free consultation.

Shopify vs Magento 2.0: Why Shopify is still the better eCommerce tool