Marketing automations are fairly new to Shopify, but that doesn’t mean that they can’t help maximize conversions and win-back customers through re-engagement. Sending out emails for abandoned carts, abandoned check-outs, abandoned browsing, and win-backs can all help merchants re-engage your customers.

How do Re-Engagement Automations Work?

Re-Engagement Automations use Shopify’s native automations from their marketing page to send emails that are triggered by specific events. Merchants need to be using a Basic Shopify plan (or higher) and have marketing permission enabled to create automations. Store/account owners automatically have this permission, and can allow staff accounts access as well. Customers also must have completed a prior purchase and subscribed to a store’s marketing list before abandoned browse and cart emails can be sent out.

Automation emails count towards the 10,000 free emails per month, with every additional 1,000 emails an additional US dollar. However, the one exception is one of the best re-engagement automations: abandoned cart automations. 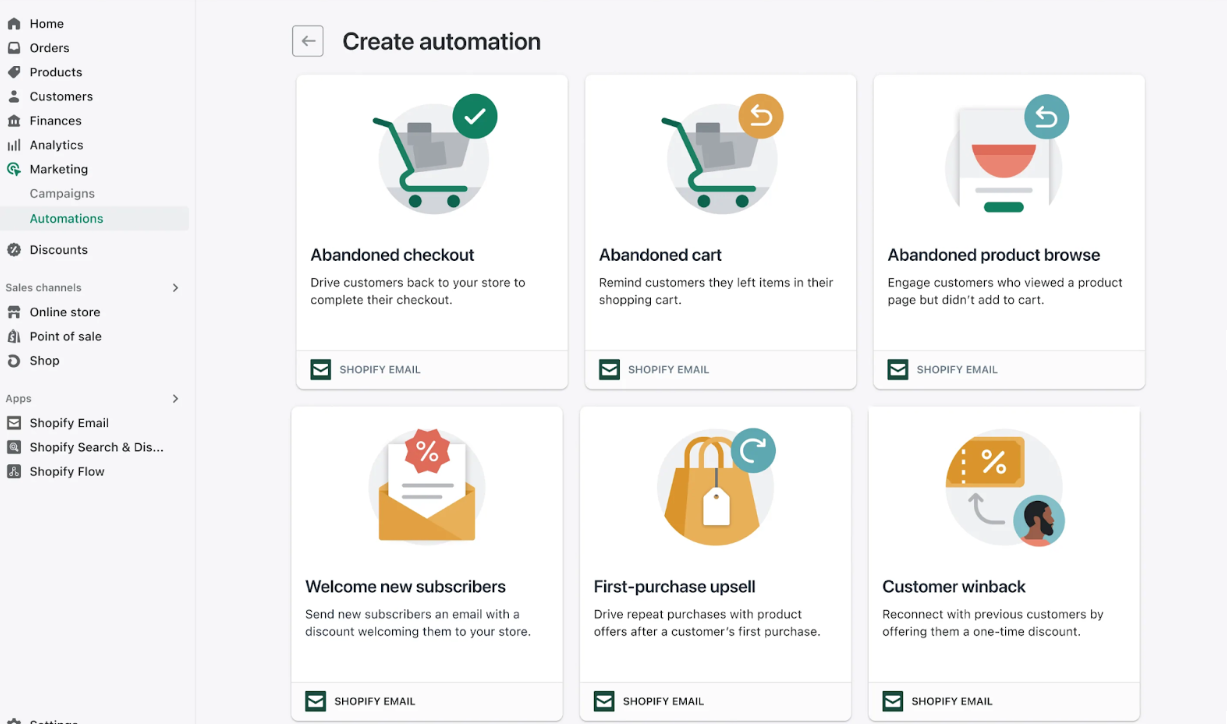 A tale as old as time: putting something in your cart so you don’t forget about it, and then leaving it there to be forgotten. We’re all guilty of it. In fact, studies have shown that on average, just under 70% of carts are abandoned. That’s a lot of missed revenue!

Abandoned cart automations allow merchants to send emails after a cart has been abandoned to remind customers that they have an item in their cart. The time between the cart being abandoned and the email is up to the merchant.

Triggers can be done for multiple emails for the same cart. For example, sending out one email at 1 hour, another at 1 day, and another at 1 week. It is important that between every email the automation checks to make sure that the cart is still abandoned, otherwise a customer may get an email for a product they have already bought. While abandoned cart automations have a template on Shopify, merchants can also edit it or create their own custom template.

Just like abandoned cart emails, merchants can trigger these to go multiple times and use both the template or a custom made automation, making sure that the event (in this case, abandoned checkout) is still true before every email.

Abandoned browsing refers to when a customer looks at a product, but doesn’t further engage with it or add it to their cart. Like the prior automations, merchants can set the triggers and use a template or custom.

Our Fyresite recommendation? Coupons! Adding a one time coupon to a re-engagement automation can help a customer decide to spend money at that store. Merchants can even just add this coupon to the last automation. For example, if there is are three automations, the third one can have a coupon.

Designed for customers that have purchased from shops previously, but not recently, Shopify’s customer win-back template re-engages with prior customers by sending a one-time coupon to use. Following a template or a custom made automations, merchants can trigger these automations to reach out to old customers upon the event that they have not purchased from the store in a certain period of time. Shopify’s example below is after 60 days, but the time is up to the merchant.

Shopify allows merchants to see specific automations analytics. To do this, merchants just need to go into their marketing page to see the summary of the automation and the analytics for that automation. Using this data, merchants can determine how effective individual re-engagement automations are for business.

If you’re reading this and are not a current Shopify merchant, reach out! You can contact Fyresite to see if we would be a good fit for you and your business here.

Inflation and eCommerce: Weathering the Storm